I was surprised by this painting. It turned out to be one of my favourites, even though it wasn’t looking so hot at the beginning. I was in a bit of a hurry to apply the first layer of paint before I went to pick up the kids from school. For some reason I forgot about the existence of clear gesso, which I had bought and used to prep all these panels, and decided to apply black gesso. It was thinned with water and it seeped under my tape, meant to keep the edges of the wood clean. Eek.

After a few experimental layers, it came together. And it reminded me of a rusty ship, the sea, etc. I chose a couple smaller photos I had taken of a turquoise machine at the Britannia Mine Museum to include. The main image is of Harrison Lake, which is not a salty sea, but I took the night my 6-year-old son broke his arm on the playground at Harrison Hot Springs. I was looking across the lake at the delicate wave-upon-wave of blue mountains as they faded into the evening. I put this image on top of a photograph from the 1950s because it has such a fun edge. The piece of sheet music I used is called “Silvery Waves” and I like how even the shape of the notes look like waves. I used techniques in the bottom area to increase the feel of metal and rust, including adding some old rusty metal and a nail. And to stay true to my series, I did include a natural plant: some arbutus tree bark, which also reminds me of the sea because those trees only grow right near the salty water. Speaking of salty water, I used salt as one of the materials in the top section. 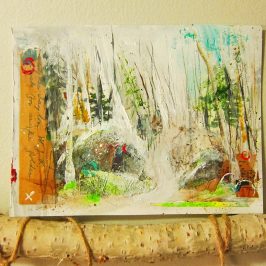 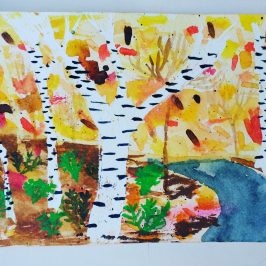 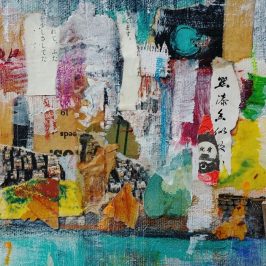 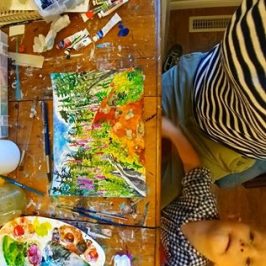 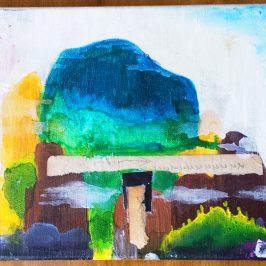 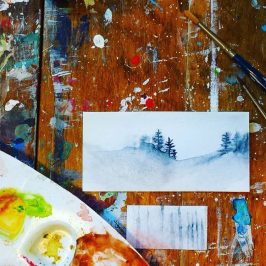